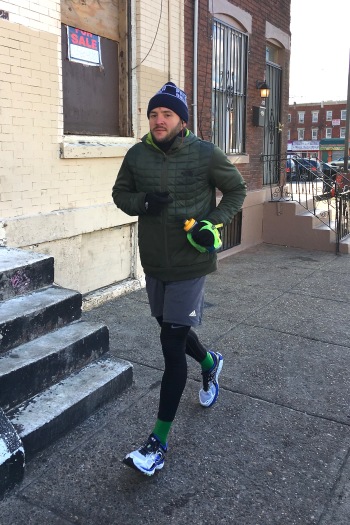 It was a cold December morning as we all huddled together and listened to the pre-race announcements. It was my 3rd year running in the Rocky 50k and this year was notably the best year by far. Being a Philadelphia native makes the Rocky 50k a desirable winter race experience: an organized run close to home that keeps you motivated throughout those cold, frosty months with the new frigid temperatures and frost-covered grass. The first year of the Rocky 50k, I missed a turn and ran a handful of extra miles well off course. The second year was filled with cold rain for the entire race. The third year I did not attend. This year, the 4th year, was colder than average considering the race was in December but the sun was shining and I made every turn correctly, running strong the entire time. As I stood there that morning alongside many incredible people from the city of brotherly love, it was time to put the formalities aside and do what we do best–RUN.

“Until you start believing in yourself, ya ain’t gonna have a life.” – Rocky Balboa

And we were off! The streets flooded with Rocky Balboa impersonators scattering through the streets of South Philadelphia with their grey sweat outfits and red headbands. Personally, I opted out of the Rocky Balboa costume and had 4 layers of clothes on: a compression shirt, an Under Armor thermal, a cotton thermal, and a winter jacket along with compression pants, a snow hat, a neck warmer, and gloves. When it’s cold I always choose extra weight and heat buildup over lightweight and freezing cold, even if it costs me some slower miles. Plus, I decided to run at a moderate pace since I ran a 30-mile training run the week prior. Nevertheless, despite the cold weather it was great running through Philadelphia again and this race sure gives you a taste of the city. Running along Passyunk Ave past Pat’s And Gino’s Steaks, down South Street, around City Hall to the Italian Market, through North Philadelphia, over to Kelly Drive alongside Boathouse Row, down the Ben Franklin Parkway to Independence Hall and back to the Parkway where you finish up the Art Museum steps–31.1 miles of Philadelphia culture all in one Saturday morning.

“It really don’t matter if I lose this fight, cause all I want to do is go the distance.” – Rocky Balboa

What we can expect from ultra marathons is this: expect the unexpected. As I mentioned earlier, the first year I ran the Rocky 50k I missed a turn and ended up lost for a handful of miles. There’s a small street called Somerset Ave leading to a potentially confusing loop if you’re not paying attention. If it’s your first year, be on the lookout–a number of people have missed this turn in the past. This year I brought the turn-by-turn directions and my cellphone to use for navigation. The plan was to take the race one turn at a time. I read each turn from the course directions, found the street location on my cellphone GPS, and ran to it. Once I reached the intersection, I continued the process and did this for the entire run. Although I’m familiar with Philadelphia considerably well, it’s easy to miss a street when running long distance, especially when you are focused and do not have any course markings for guidance. All in all, I successfully reached every street with ease from South Philadelphia and around the city to the Art Museum with no issues.

So why was the Rocky run created? It’s been said that one day an article was written to trace the famous Rocky training run from Rocky II. If you’re familiar with the movies, it’s the run when Rocky finishes on top of the Art Museum steps with his hands in the air. A famous and influential moment in motion picture history. Well, if you’re from Philadelphia you’ll quickly realize the route did not make much sense in the movie from a geographical standpoint. After piecing each scene together, it was determined that Rocky would have ran approximately 50k! Yes, it did not make sense to most people, but you see, ultra runners are not like most people. Mileage that some people aren’t willing to drive, we get excited to run. I say this because whenever I tell someone I’ve ran 100 miles the reply is usually, “One hundred miles?! I can’t even drive 100 miles.” Anyway, one ultra runner saw this as an opportunity and it would be said from that day forward that every December a group of fanatical runners from the Philadelphia area must trace Rocky Balboa’s famous footsteps to keep his spirit alive, and so we ran.

Ready to take the starting line? Here’s a few things to keep in mind: First, the Rocky 50k is a Fat Ass so you can just show up and run. Also, there are absolutely zero course markings so I would bring a set of directions and/or run with a group. In regards to weather, you can expect it to be cold and potentially wet. You also want to consider your fueling technique; I used a different one each year. In 2013, I ran with a handheld and filled up at corner stores throughout the city. In 2014, I ran with a camel pack which was much more convenient. This year, I only fueled twice because of my current hydration abilities. I ran the first 20 miles with zero consumption and met my family at miles 20 and 26 for some coconut water. Furthermore, you’ll get a few hills here and there but no real elevation to ultra marathon standards. You will also run through some parts of North Philadelphia so make sure you’re comfortable with a city neighborhood environment. Also, keep in mind that since you’re in the city you must improvise with bathroom stops. Finally, any old running shoes sitting around the house can be donated on race day morning. Oh yeah and don’t forget…have fun!

The Rocky 50k is a versatile run in that everyone’s goals and purposes are sizably different. For some, it will be there first ultra marathon, for others a chance to run locally, or maybe to leverage some motivation and keep their legs moving through the winter months. Experienced in ultra marathons? Well, it’s a great chance to try a new shoe, a new fueling technique, or new winter gear. Personally, I used it as training run for something larger I’m after. In my opinion, whatever the result you’re shooting for, the Rocky 50k is first and foremost about having fun and coming together as a running community. What better place to do this than in the city of brotherly love during the holiday season? If you decide to take on the challenge I recommend watching Rocky II the night before, adding Eye of the Tiger to your playlist, and finishing up those Art Museum steps with your hands in the air. It’s an advantageous way to keep your mileage up through those cold winter months and a pretty good excuse to pick up a cheesesteak. 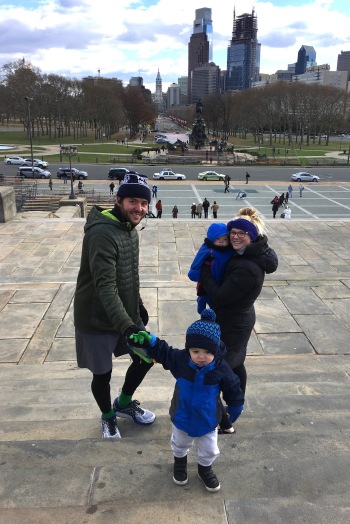 “Going in one more round when you don’t think you can, that’s what makes all the difference in your life. ” – Rocky Balboa

At the end of the run, when I approached the art museum steps, I saw my wife and two sons in the distance. As they came into vision, my heavy feet became lighter and my weak legs gained strength as the final stretch of the race was coming to an end. It’s these moments we must take in, the final stretch of an ultra marathon, when the finish line is in sight and we reflect on how far we’ve come. Doing something I love, in the city I love, with my beautiful family that I love unconditionally, really puts the moment into perspective. As I reached my family, we held hands and moved upwards one step at a time, together to the top. This moment was by far the best part of my whole entire day. After the race, as I picked up my son and held him on the walk back to the car, at this new moment, I now only had one thought, and that thought was,”Wow, my legs hurt!”

“You see this guy here? That’s the toughest opponent you’re ever going to have to face. I believe that’s true in the ring, and I think that’s true in life. Now show me something.” -Rocky Balboa

When setting new goals, we face many different opponents. When setting extraordinary goals, like ultra marathons, the opponents will only multiply and become stronger unless we can see them as just that, the opponents or the resistance to our dreams. We face many different opponents in life, from activities and projects to phone calls and emails. They all want our attention NOW but we need to find time for ourselves as well. When we give time to ourselves, we can give more to others. When I arrive home from a run, my stress has been decompressed because I’m able to have significant time for self-reflection and goal setting. When I arrive home, my sons have 100% of Daddy. This is compared to not being physically active and being passively attentive. On the other hand, we must also be conscious of our internal opponents. It’s this type of opponent that will be the toughest one we face, the opponent that is found in the mirror–this opponent is ourselves. We develop beliefs that stop us from taking action, like attempting to run longer mileage. But you know what’s interesting about beliefs? They limit us, but they can also help us grow. They stop us but they can also boost us forward. They trap us but they can also set us free. Aren’t beliefs just a thought we’ve created? And from that thought, doesn’t it create a feeling that drives our behavior? The longer we hold on to these beliefs, the more concrete they seem; for example, that 26.2 miles is a runner’s limit. So when we recognize our limiting beliefs, we can then set new beliefs to take us to extraordinarily levels. In this we are not in effect but we are in control and it can help us to keep it moving, moving, and moving forward…Keep It Moving!

“I’m not the richest, smartest, or most talented person in the world but I succeed because I keep going, going, and going.” – Rocky Balboa